The names today are irrelevant.

They are the types of names that could send Cespedes Family BBQ into endless hysteria. It was Brian Bogusevic. Matt Dominguez. Lucas Harrell. Hence, it’s obvious the reason the Houston Astros endured three consecutive 100-loss seasons, culminating in an excruciating 111-loss campaign in 2013.

Fans today might hear the phrase “three true outcomes” and not really comprehend what that entails. Said outcomes are home run, walk, and strikeout, and as I explained last fall, that is the essentiality of Major League Baseball today. Why each end result of an at-bat is classified as “true” provides deeper meaning to professional baseball’s present-day aphorism, and it can be loosely attributed to one of baseball analytics’ defining metrics, Weighted Runs Created Plus (wRC+). A number that normalizes all hitters into a vacuum, wRC+ compares a player’s pure run creation proclivity in relation to the rest of the league, accounting for uncontrollable, extrinsic factors that can affect a player’s ability to create runs, such as ballparks or quality of opponent. It is perhaps the best measure of a hitter’s impact on a game at the plate, plus has to be at least partially responsible for the launch angle craze and a record-breaking year for the long ball (and for the K). The only way to guarantee a run be scored in an at-bat is to hit the ball over the fence. Thus, wRC+ has a slight built-in advantage for those feast-or-famine players, like Justin Maxwell or Chris Carter, two of the names from when Houston first embarked on their rebuild.

Tanking in baseball is misunderstood and frankly a myth, as intentionally losing and intentionally spending less money are entirely different. Much was made a few years back of the quirky factoid that an Alex Rodriguez corpse was cashing larger checks than the entire Astros team, whose salary amounted to a measly $24 million combined. But the cheapest way to construct a competitive Major League team is through wRC+ adoption. The Astros did so in order to buy some time for young talent acquisition and development. Of course, the product on the field in the interim constituted next to nothing, but we’re more focused on the design. There was a rhyme and reason to the names of the lowly Astros, and it was somewhat of a revolutionary rebuilding path. Now, the metrics, conceptions, and logic behind those three consecutive 100-loss seasons are the widespread blueprint for organizational development.

The apple doesn’t fall far from the tree, which enters September 21, 2015, into the annals of important dates of the Milwaukee Brewers franchise. David Stearns was younger than the franchise’s most recognizable player. He was a Harvard PoliSci grad. Above all, he was formerly an Astro executive, and as its assistant general manager played an integral role in Houston’s current placement among baseball’s elite. In his brief tenure as the Brewers’ head man, Stearns has already proved he may have outsmarted even his old club’s model. A more-than-necessary payroll slashing sent Doug Melvin’s spending habits spiraling to the ground along with his career, passing the torch to the (now) 32 year-old who thrives as a market bottomfeeder. However, using the Astros’ recent timeline as a barometer, Milwaukee is ahead of schedule beyond imagination. The Brewers can be found bringing up the rear in the MLB payroll department in 2017, just as the Astros of old. They found players that could fill Stearns’ analytical principles, such as an Eric Thames/Jesus Aguilar platoon at first base, or Keon Broxton garnering the majority of at-bats in center field. It was a cheap alternative assemblage of steep launch angles and an absence of two-strike approaches that won 86 baseball games, falling one game shy of an improbable postseason berth. The 2017 season was astonishing considering it required half a decade for Houston to climb out of the cellar using identical tactics. One of the few explanations must be the staff, specifically the keystone combo of manager Craig Counsell and pitching coach Derek Johnson. Jimmy Nelson’s unprecedented 14.1% improvement from 2016 to 2017 in K-BB% blew the rest of baseball out of the water, and such a leap doesn’t fall from the sky. The same can be said about Chase Anderson, who improved his wFA (Fastball Runs Above Average) by 12.0 and wCH (Changeup Runs Above Average) by 13.4, both Major League bests. Milwaukee might have lucked into a perfect storm season by the top half of their starting rotation. Or perchance these are simply late-blooming pitchers under excellent tutelage. 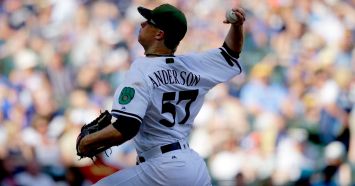 Chase Anderson added 2 mph to all his pitches on average in 2017, allowing him to become one of the National League’s best starters.

Luck is inevitable and compulsory to reach baseball’s pinnacle. The Astros are no different, with the most noteworthy token of luck being the story of how Jose Altuve landed in the organization, which is told on seemingly every single Astros national broadcast. The 5’6” three-time batting champ, although, was long a heterogeneity from the general feel of the Astros’ lineup. Attacking early and often in each his plate appearances, Altuve could not care less about your fancy “true outcomes.” Altuve, the presumed AL MVP this year, is so damn good that the Houston organization not only let him be, but actually started to take after him. Until 2017, other Astro hitters lagged behind Altuve’s rebellion against the establishment.

As we can see, the Astros’ offensive eruption this season is probably strongly correlated to their lineup making A LOT more contact than in the previous five years. As recent as last season, Houston owned the fourth-highest strikeout rate in baseball. It plummeted to the lowest this season, and only two players (George Springer and Carlos Beltran) punched out in the triple digits on the year.

David Stearns, if it wasn’t clear enough already, is no dummy. He, and he only, served as the right-hand man to the forward-looking architect Jeff Luhnow in Houston. He helped draft Alex Bregman, had a front row seat for the development of Springer, Carlos Correa, and Lance McCullers. Just as he did not expect to be in an NL Central title chase as early as 2017, it likely wasn’t anticipated that the Astros would vault from 111 losses to the AL Wild Card in two short years. The simple explanation is the analytics at play. Yeah, the 2017 Brewers struck out in a quarter of their plate appearances (yikes), but that was balanced out by a .180 team ISO Power (11th) and .308 BABIP (6th) interacting with one another to form a quick strike offense. Stearns idealized this type of lineup in a supposed retooling year when he signed Thames, traded for Travis Shaw, and introduced Orlando Arcia to a new bat path. It’s safe to conclude this is now a verified formula for regular season success in Major League Baseball, since this season’s Brewers are now members of a growing handful of examples. The 2015 and ’16 Astros Stearns helped forge fielded competitive teams in the same fashion. But as I pointed out earlier, such success can only be sustained for so long, and the “three true outcomes” magic almost always evaporates in the October air.

Luhnow’s whippersnappers are now all in the big leagues and cutting down on the K’s. He signed a rookie 32 year-old first baseman from Cuba for $10 mil/year because of his level swing and outfield gap real estate, which is so unlike those nerds. The .282 team BA and .346 OBP put Luhnow in a position to go out and get one of this generation’s greatest starting pitchers, cementing his team’s elite status. Luhnow clearly wasn’t going to sit idly by while his team whiffed its windows of opportunity away, and neither will his former protégé.

Keston Hiura and Lucas Erceg are part of the Brewers’ wave of young players who can solve their strikeout conundrum.

There is indeed light at the end of the tunnel. The Milwaukee Brewers won’t continue to break their own single-season strikeout record. The RISP struggles that effectively cost them their season will cease sooner rather than later. The Brewers’ current construct is temporary. It’s cheap, it’s a stopgap, and it produces wins to a respectable extent. With Stearns branching off from Luhnow directly, we can only expect the Brewers are in the midst of the same diabolical plan. There’s far more young talent on its way, and enough of a surplus for Milwaukee to maybe swing a deal of its own. Marcus Stroman is potentially on the market, as is Gerrit Cole, but at the end of the day it’s important to keep in mind the timeline. As gravitating as the 2017 Brewers were, several of its faces won’t be around when Milwaukee hoists the Commissioner’s Trophy. If the Houston Astros’ adjustment is any indication, that day will surely come for the Cream City.